Cause of polyurethane hose failure used in water distributor

To support the water distributor a polyurethane hose was used, it was connected to a house water installation. The hose was placed along the walls of the kitchen. Damage appeared in the part where  refrigerator was putted. Failure occurred 24 months after the installation of cable. To reduce the cost of expertise a simple study  was done and was combined with analysis of data from the manufacturer in Taiwan. Study mainly comprised of  visual inspection, flame method to identify the polymer and light microscopy for crack inspection.

Perforation of the hose occurred on a 3 cm section in the distance of 190 cm from one of the ends, total length of the polyurethane tube was 480 cm. Numerous chaps on the inner surface of the cable and longitudinal cracks on the outer surface appeared in the damage area.

Flame method confirmed that the material is polyurethane. Polymer flame characterized of yellow color and strong smell. Material ignition was graded as medium.

Microscope observation revealed, outside the crack region, numerous micro cracks of the polymer from the inner surface, these cracks were 0.5 mm to almost 1 mm in depth. They could be observed not only in the region of the damage but also a couple of dozen centimeters from the perforation. 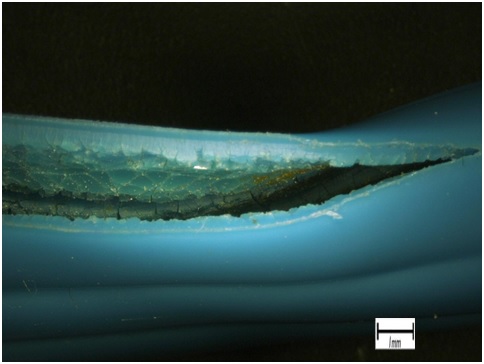 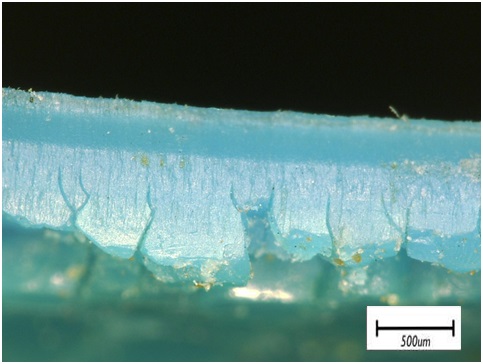 Furthermore on the inner surface of the hose a white and rust-colored residue could be observed, precipitated from water. Probably they were compounds of iron (Fe2O3, Fe3O4) and calcium carbonate (CaCO3), that are common in water pipe water. 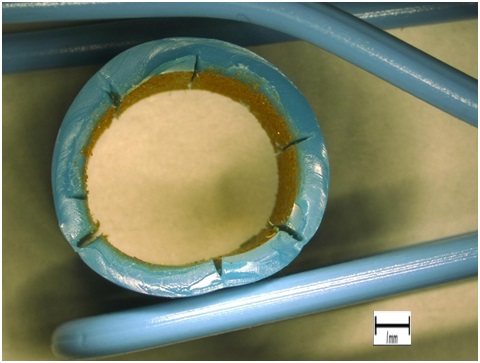 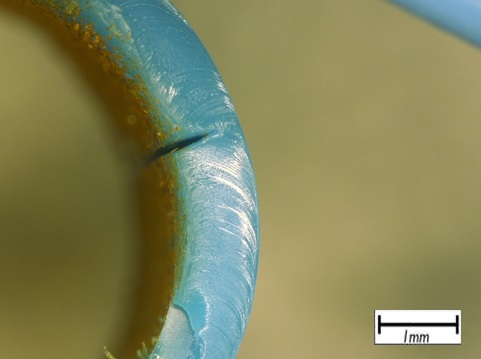 Main advantages offered by polyurethane are:

Based on data from manufacturer (in accordance with SHPI catalog), polyurethane hoses 5.5×8 mm are mainly used in pneumatic installations, where air is used. Another recommendation is to replace the tube after 8-12 months because of its reduced lifespan after contact with water. Nevertheless polyurethane tube producers allow them to be used in water installations.

The damaged region of the tube was subjected to high temperature, caused by the refrigerator, especially the Freon compressor, that can generate a large amount of heat and increases the surrounding temperature much above 40°C (even to 70°C). Furthermore refrigerator was installed into covered alcove, behind which the hose was located, this allowed heat accumulation. Pressure in the water installation can be up to 6 bars.

Based on conducted tests and analysis of collected documentation it was considered that the main cause of the polyurethane hose failure was the stimulated degradation of the polymer triggered by adsorption of water in elevated temperature.